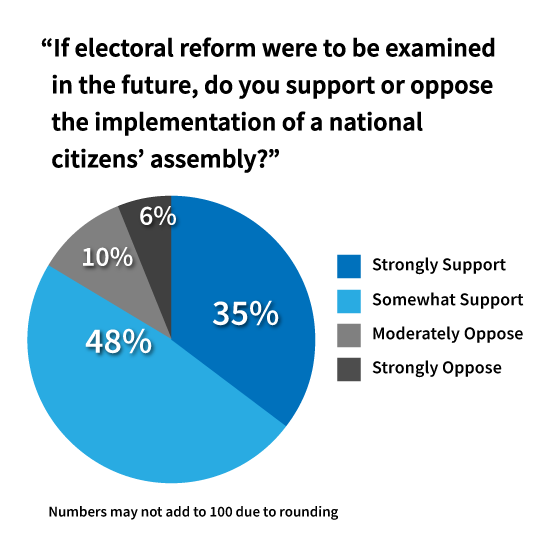 A new poll by Angus Reid in partnership with Fair Vote Canada shows strong support for a citizens’ assembly as a mechanism to allow ordinary citizens to lead the conversation on electoral reform.

Here are the results from questions included in a survey of 1,510 Canadians conducted from September 12-13, 2019. (See our press release on electoral reform).

To what extent do you agree or disagree with the following statement: “The best way to achieve electoral reform is with substantial input from citizens across the country.”

85% of respondents Strongly Agreed or Agreed with this statement.

Respondents were then introduced to the idea of a National Citizens’ Assembly:

Questions have been raised about the best way to examine the issue of electoral reform. One proposal is to hold a national citizens’ assembly. A citizens’ assembly is a non-partisan group of citizens independently selected to represent the public that is given the time and resources to:

They were then asked the following: If electoral reform were to be examined in the future, do you support or oppose the implementation of a national citizens’ assembly?

84% of respondents said they support the implementation of a national citizens’ assembly.

To what extent do you agree or disagree with the following statement?

“Canadians clearly support the idea of citizen involvement in the analysis of our electoral system”, said Demetre Eliopoulos, SVP and Managing Director of Public Affairs at Angus Reid Global. “When Canadians are introduced to the idea of a citizen’s assembly, their reaction is to espouse the idea and its implementation.”

“Electoral reform is about empowering voters and should not be subject to decision-making exclusively by those who have a strong vested interest in the system that elected them. Canadians have become rightly cynical towards politicians on this issue. They want a process they can trust. A citizens’ assembly delivers that,” says Réal Lavergne, President of Fair Vote Canada.

Citizens’ assemblies are unique because they are independent and free of political interference. Citizens are selected by a civic lottery, to create a mini-public that truly reflects Canadians. Experience shows that citizens without a vested interest in the outcome are able to set aside partisan considerations and produce outcomes that best reflect the public interest.

The site contains information about how citizens’ assemblies work and a growing list of endorsers for an idea that appeals to Canadians across the political spectrum. Citizens’ assemblies have recently been held in Ireland, Australia, Belgium and France, and one is planned next year in Scotland. In 2016, the Canadian federal government commissioned a similar process on a smaller scale on Pharmacare

“Democracies are under pressure across the world. Canada is not immune. I believe the best antidotes are institutional renewal and efforts by citizens to find coalitions that go beyond traditional party lines.”

“The success of citizens’ assemblies around the world proves that when given the opportunity for meaningful participation, citizens can reach a consensus on challenging issues, including issues where politicians appear divided. Many Canadians were disappointed that electoral reform did not move ahead. A National Citizens’ Assembly on Electoral Reform will let us find a consensus that works for all Canadians.”

In partnership with Fair Vote Canada, Angus Reid Global conducted an online survey among a representative sample of 1510 adult Canadians. The respondents are members of Angus Reid Forum. For comparison purposes only, a probability sample of this size would carry a margin of error of +/- 2.5 percentage points, 19 times out of 20.