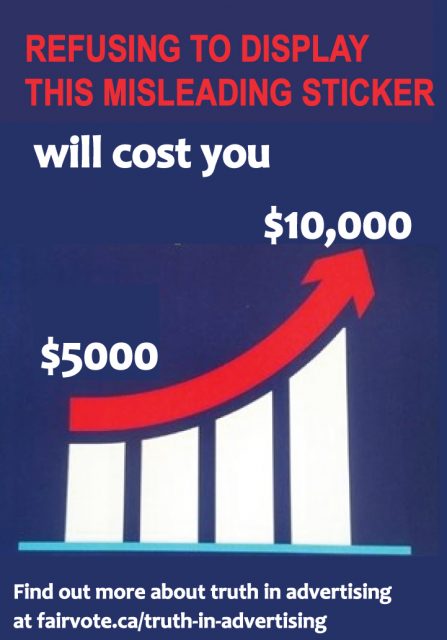 Doug Ford’s plan to plaster stickers opposing the federal government’s carbon tax on gas pumps across Ontario – and fine gas stations who fail to comply up to $10,000 – starkly illustrates the need to regulate political advertising in Canada.

Unfortunately, the Advertising Standards Code does not apply to government or political advertising. There is nobody to whom one can even file a complaint if citizens are being misinformed or manipulated.

The Advertising Standards Code states that,

(a) Advertisements must not contain, or directly or by implication make, inaccurate, deceptive or otherwise misleading claims, statements, illustrations or representations.

(b) Advertisements must not omit relevant information if the omission results in an advertisement that is deceptive or misleading.

The planned advertisements mislead voters by omitting key information, notably that at least 90% of the tax will be returned to households in rebates and that many households will end up receiving more in rebates than they pay in carbon taxes. In addition, the cost to citizens of doing nothing on climate change isn’t factored into these ads at all. The end result is that citizens are left with a skewed notion of the overall cost to them.

The government is using taxpayers’ own dollars to mislead them – and fining businesses which refuse to help them. Taxpayers will also be funding inspectors to enforce compliance.

Canada needs an independent body to hold governments, parties and political advertisers accountable to very basic standards of honesty. Fair Vote Canada believes that voters deserve to make informed decisions based on accurate information. The very foundations of our democracy are at risk when election campaigns, referendums and public attitudes towards policy choices between elections can be shaped by advertisements that distort the truth.

In New Zealand, citizens can complain to the Advertising Commission about dishonest political advertisements. In South Australia, the Electoral Commission investigates complaints and can require a party to remove an advertisement and issue a retraction if it is determined that the advertisement is purporting to be a statement of fact that is inaccurate and misleading to a material extent.

It is time that Canada implements an independent body to review and enforce basic standards to ensure that government and political advertising is based on fact, rather than partisan spin. Canadian voters deserve no less.

Fair Vote Canada is a citizens’ campaign for proportional representation. Our position on truth in political advertising can be found at https://www.fairvote.ca/truth-in-advertising/.