Click here for a PDF version of this document

A weakness of winner-take-all systems is that small swings in popular support can cause huge changes in outcomes, resulting in policy lurch. Similarly, a bandwagon effect can result in the accidental defeat of popular MPs. This leads us to ask whether PR might help to avoid such swings and make re-election more predictable for well-performing MPs.

Researchers Matland and Studlar have studied this question, using a sample the same 36 countries as Lijphart’s ground-breaking research (see Appendix 1) over a period of 20 years. They compared turnover on an election-by-election basis for countries with different electoral systems.

For Canada, the majoritarian system seemed to produce a relatively high rate of turnover of 40% compared to an average turnover in all countries (majoritarian or PR) of 32%. This will not surprise Canadian politicians, and Canada’s 2015 election results were a good example of how high turnover can occur under Canada’s current system.

The researchers concluded that the relationship between systems and incumbency was a complex one that could best be understood in terms of the specific features of electoral systems, notably the “candidate centeredness” of the system – the degree to which voter preferences apply to individual candidates rather than parties.  What they found was that in candidate-centred systems, individual MPs who are seen to be vote-getters based on being liked by local voters or regional voters are more likely be nominated again and much more likely to be re-elected. This was less likely to be the case in electoral systems where voter preferences were predominantly party-based as would be the case in list-PR systems or strongly party-centric majoritarian systems (like in Canada). 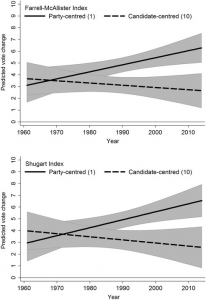 This has been confirmed by Soderland, who used cross-sectional time-series data of close to 300 observations for 23 OECD countries between 1961 and 2014, and two indices of the “candidate-centeredness” of electoral systems. The analysis showed that the predicted vote change (plus or minus) for incumbent parties was systematically lower in candidate-centred electoral systems.1 As noted in the charts on the right for each of the two indices under study, this effect has become stronger over time.

This suggests that rates of incumbency would be higher in PR systems that are candidate-centered, such as STV or MMP. This is, in fact, what we observe.

Ireland is the country most often cited when we talk about STV. Ireland uses STV with 3-5 member districts, providing a fair level of proportionality and a strong local connection. Gallagher found that:

Comparing re-election rates across 25 countries, Matland and Studlar found that Ireland had the fourth highest rate of incumbent re-election.3 Redmond and Regan looked at a longer period in Ireland and found an even stronger incumbency advantage:

“During the period 1927-2011, incumbent members of Ireland’s Lower House (Dáil Éireann) were re-elected, on average, 81.7 percent of the time. This rate of incumbent re-election is amongst the highest in the world.”4

Instead of large seat swings between elections and the loss of popular, talented local MPs when voters “kick the bums out” in a winner-take-all sweep, STV provides a more nuanced decision-making tool. This allows voters to retain local MPs who have served well in local districts which accurately represent voter diversity.

MMP also yields a much higher incumbency rate than most PR systems. Most candidates run on both sides of the ballot – the constituency side and the regional party side, so representatives can shift from winning local seats to winning compensatory seats, and vice versa. Well-performing MPs caught up on the losing side of a sweep may still be elected regionally.

“Chances for double listings are relatively common in mixed electoral systems such as in Germany. As expected, double listing of candidates has a highly significant and negative effect on turnover.”

More than 85 percent of the winning candidates in Germany’s 1998 election ran at both levels. Massicotte showed that, in Germany, the likelihood is one out of five that a member will alternately hold both types of mandate in the course of a parliamentary career. Among the 53 longest-serving MPs, no fewer than 27 (over half the total) have been in both situations.5 Matland and Studlar (2004) found the incumbency return rate in four elections in Germany to be the third highest in the 25 countries they studied, for this reason.

Trends around the world indicate a move to better representation of voter diversity in countries with multiparty systems, as a result of  PR itself, and of PR models that offer voters greater choice between candidates of the same party at the ballot box. The evidence suggests that PR systems such as STV and MMP offer incumbents a greater chance of reelection than majoritarian systems, where small swings in the popular vote produce large swings in seat counts. STV is associated with high incumbency rates as popular representatives are re-elected by local voters. MMP is associated with high incumbency rates as representatives shift between local seats and compensatory seats. With no closed lists, regional MPs are accountable, not immune to defeat.

5 Massicotte, Louis (2004) In search of a compensatory mixed electoral system for Quebec