Click here for the PDF version of this document

Balancing Trade-offs for a Win-Win Solution

Electoral reformers in Canada have espoused two main ways of increasing the proportionality of our electoral system:

While MMP and STV both deliver proportional results, some critics have expressed concern about the increased size of ridings that result when using these approaches in rural settings. Under MMP, single-member ridings would remain, but would typically be about 60% larger. Under STV, the smallest multi-member riding that could be envisaged in rural areas would involve pairing two ridings. Leaving some single-member ridings as-is would be an option, but that would do nothing for proportionality or voter equality in those ridings.

This brings us to recommend consideration of a hybrid model that would combine the use of multi-member ridings and top-up seats to meet the different needs of both rural and urban areas, while protecting the objective of proportionality. We call this hybrid Rural-Urban Proportional Representation (RU-PR). Rural-Urban PR uses single-member ridings as may be deemed appropriate in rural and “small-urban” areas involving cities and towns of less than 100,000 residents. In large urban and surrounding areas, it uses multi-member ridings. Proportionality is maintained for both urban and rural voters by adding a limited number of regional top-up seats in an MMP-like fashion.

The advantages of RU-PR are that it makes it unnecessary to create large multi-member ridings in the search for proportionality. Areas in or near large urban centres, where 60% of Canadians 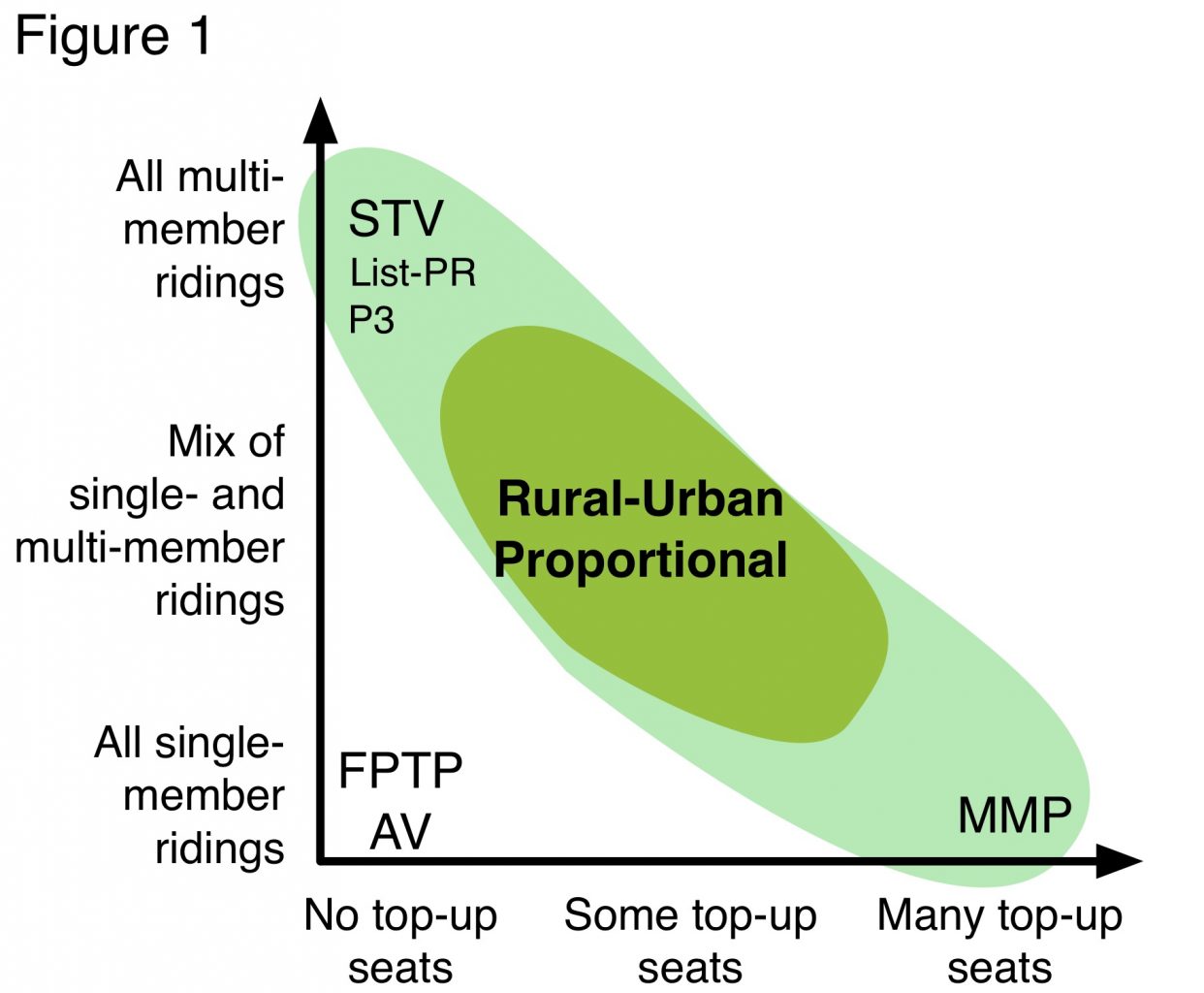 live, could have multi-member ridings of modest size as in Ireland or Northern Ireland (where ridings range from 3-6 MPs). Rural areas and small-urban areas could use single-member or dual-member ridings as appropriate. Relatively few top-up seats would be required to compensate for any remaining disproportionalities because the first-round results would already be quite proportional.

The Rural-Urban PR model draws inspiration from several sources. It builds on a suggestion proposed by Canada’s former Chief Electoral Officer, Jean-Pierre Kingsley, that we use multi-member ridings of three to five MPs in urban areas while leaving rural and remote areas as single-member ridings. However, it adds a greater element of proportionality to that proposal.

RU-PR draws further inspiration from Sweden’s electoral system. After electing most MPs in small multi-member ridings using a list-PR voting system, Sweden reserves 11 percent of MP seats to be allocated on a top-up basis, country-wide, to compensate for disproportionalities at the local level. Because only a few top-up MPs are needed, Sweden uses the simple one-ballot “best runners-up” method to elect them. Canada could do the same. 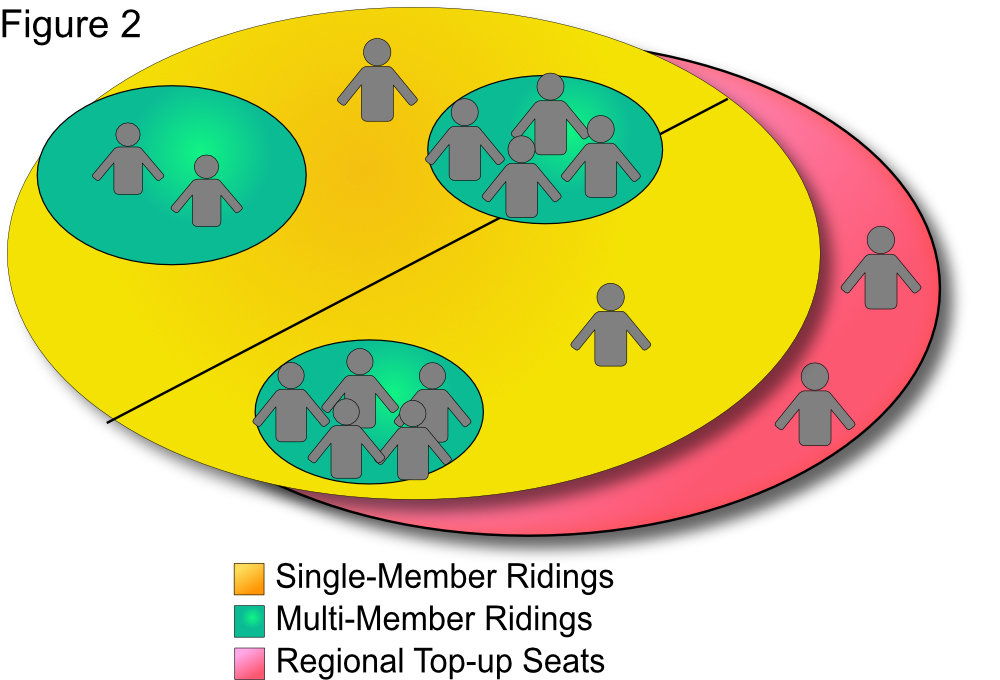 In Canada, we estimate the RU-PR hybrid model would require a top-up layer in the order of only 13% to 15% of total seats, much fewer than the 35-40% usually envisaged under MMP.

RU-PR can be tailored to Canada’s specific needs by adjusting a number of design features, including the size of ridings, the number of single-member ridings, how MPs are elected and how top-up seats are filled. These are discussed in more detail in the “Design choices” section of this appendix.

The two examples shown increase the size of the House by adding the top-up seats to the current 338 seats. This allows existing single-member ridings to stay the same and multi-member ridings to be grouped together without the need for redistricting in most cases.

An alternative maintains the current size of the House by enlarging regular ridings slightly so that fewer MPs are required. The seats thus freed up in the House become the top-up seats. This is the typical approach when implementing MMP. However, RU-PR needs a riding size increase of only 13-20%, which is far less than the 60% typically required by MMP.

In both examples, the urban ridings in Calgary and Edmonton are grouped into multi-member ridings of 5-6 MPs each. However, the 13 smaller rural and small-urban ridings are treated differently in the two examples: in one, the choice is to keep most of them as single-member ridings; in the other, the choice is to use small multi-member ridings of two or three MPs each wherever possible. Middle-ground options could also be envisaged, but we will limit ourselves to these two examples for illustrative purposes. 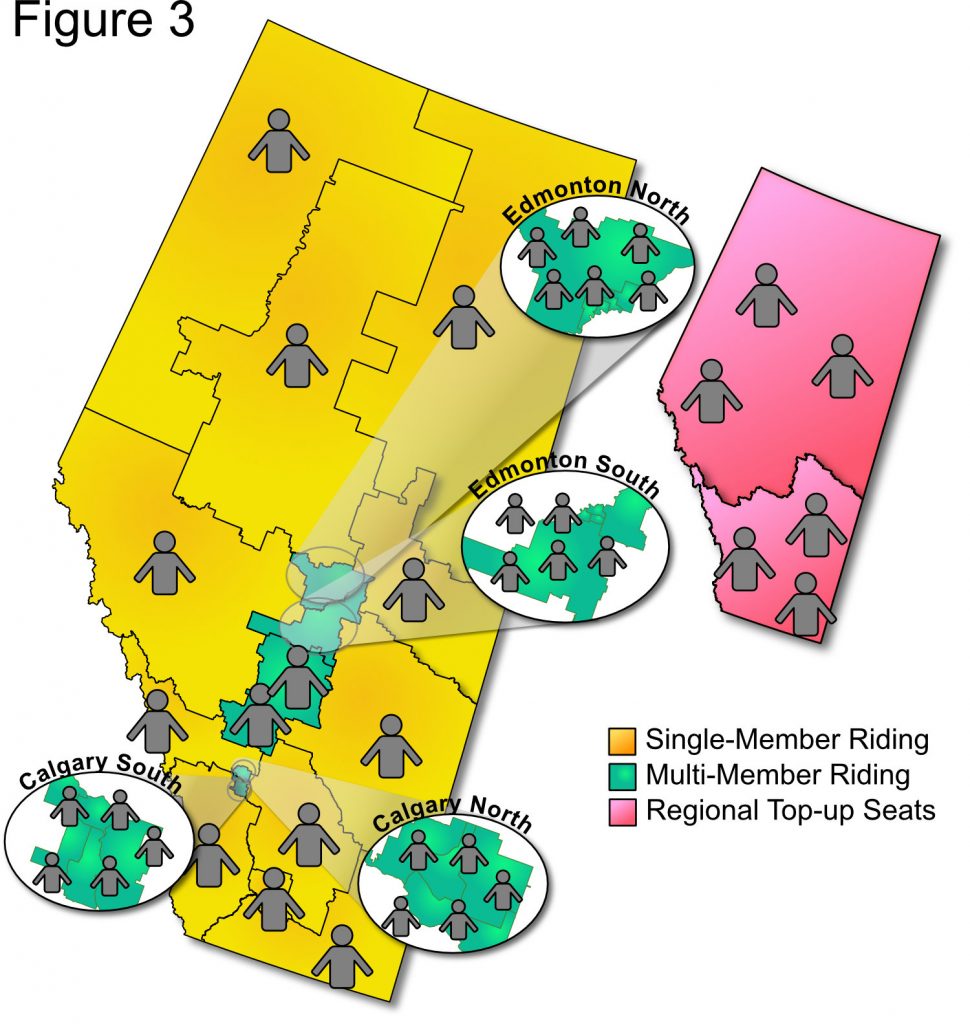 For example, one might be a Green Party MP in northern Alberta. Such an MP would represent the voice of Green Party voters throughout northern Alberta and might hold office hours in several parts of the region, similar to regional MPs in Scotland. Of course that single MP would not be the sole MP representing the ridings of that region. Supporters of any party, including the Green Party, would have the choice of calling on their single-member MP if they have one, or any of the multi-member MPs in their riding.

The first example that we would like to put forward to illustrate the Rural-Urban PR concept is one inspired by Jean-Pierre Kingsley’s proposal alluded to earlier. Country-wide, we estimate that this option might retain about 25% of total seats as single-member ridings. This would make it easier for these MPs and their constituents to maintain a link with each other in rural and small-urban ridings. In this Alberta example, we have kept 11 rural and small urban ridings as single-member ridings. Red Deer might have 2 MPs. In total, this configuration would have 11 single-member ridings, 23 seats in multi-member ridings and six top-up seats, for a total of 40, under the additional seats approach discussed earlier. The six top-up seats could be divided between two regions – one comprising the top two-thirds of the province and one in the southern part of the province. 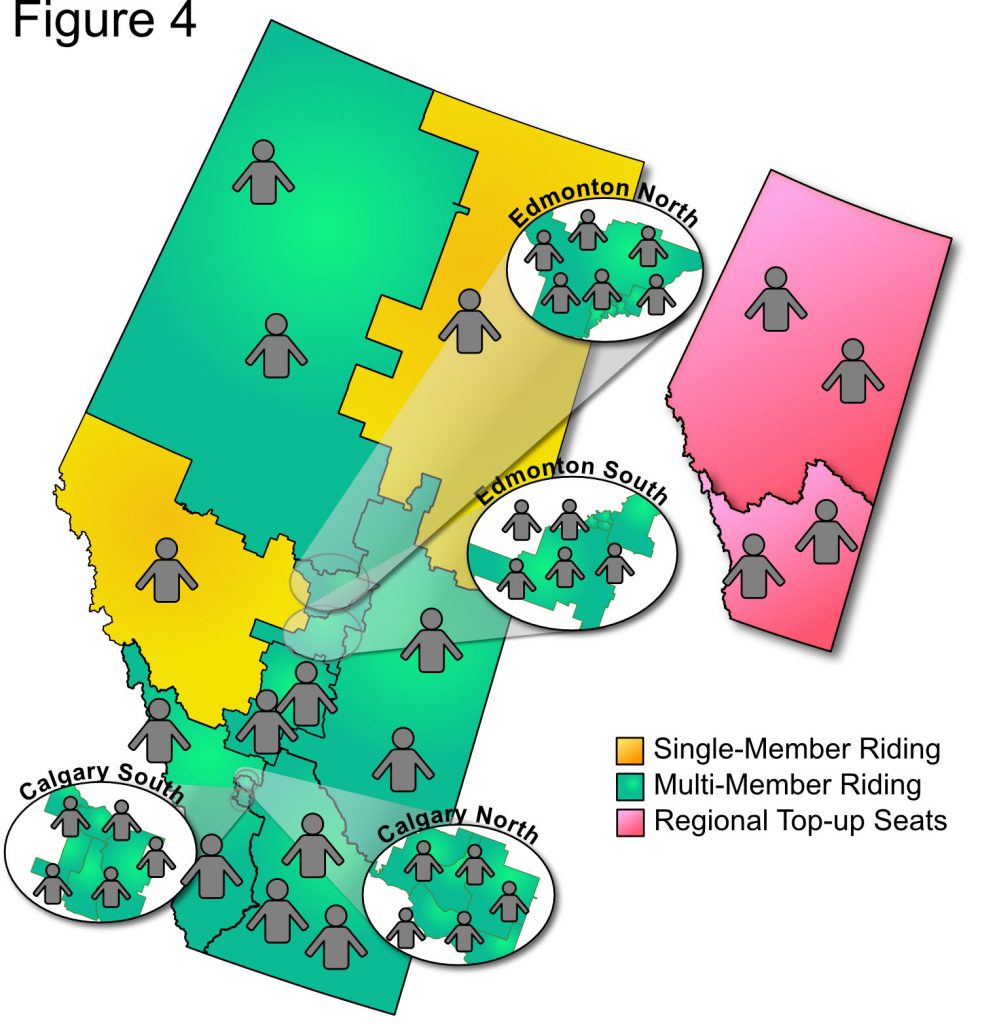 Figure 4 retains only two seats as single-member ridings for illustrative purposes. The dual-member riding shown at the north-west corner of the map is an   interesting case, because it illustrates that the case for single-member ridings does not depend only upon the remoteness or size of ridings. Based on the distribution of the population in this case, the two current ridings of Peace River—Westlock and Grande Prairie—Mackenzie would seem just as easy to manage as a two-seater, in particular the area around Peace River, which is currently split in half by the two ridings. These are the sort of considerations that would be taken into account to determine which ridings to leave as single-member ridings and how many there should be to ensure a proper balance between manageability and proportionality.

Because of the proportionality gains achieved by minimizing the number of single-seat ridings in this model, there would be less need for top-up seats. This example calls for only four top-up seats, split between two regions. This example illustrates what we had in mind in Appendix 11 when discussing the STV+ option.

The above examples illustrate the flexibility of the Rural-Urban PR hybrid that we are proposing for consideration. This flexibility allows the RU-PR model to be tailored to varying circumstances across Canada.

RU-PR requires only a small number of top-up seats compared to MMP. There are two choices when making room for these top-up seats:

Balance of single-member and multi-member ridings

Top-up seats could be filled using either an open list system or a best runners-up system.

Use of a best runners-up (no-list) system makes it unnecessary to have a separate top-up list and avoids the need for a second ballot. Voters indicate their choice for local MP, either with a single X as in Sweden or with a ranked ballot. Top-up seats are filled by determining which parties win the top-up seats in each region (following the same approach as MMP) and then awarding the seats to the strongest remaining candidate from the most underrepresented district for each party, just as Sweden does it.

The following table summarizes the key features of various electoral systems. All of the proportional systems put forward in this submission yield medium to high levels of proportionality. What changes with Rural-Urban PR is that one can achieve the same high level of proportionality with relatively small multi-member ridings by adding a limited number of top-up seats.

Different applications use different approaches to give each voter an effective voice. Features of the model can be adjusted to good effect in each region of the country to provide a made-in-Canada solution that provides the desired level of proportionality while still managing differences in riding sizes between urban and rural areas and remaining sensitive to local concerns and preferences.