MYTHBUSTER: Is a “Ranked Ballot” a Voting System? 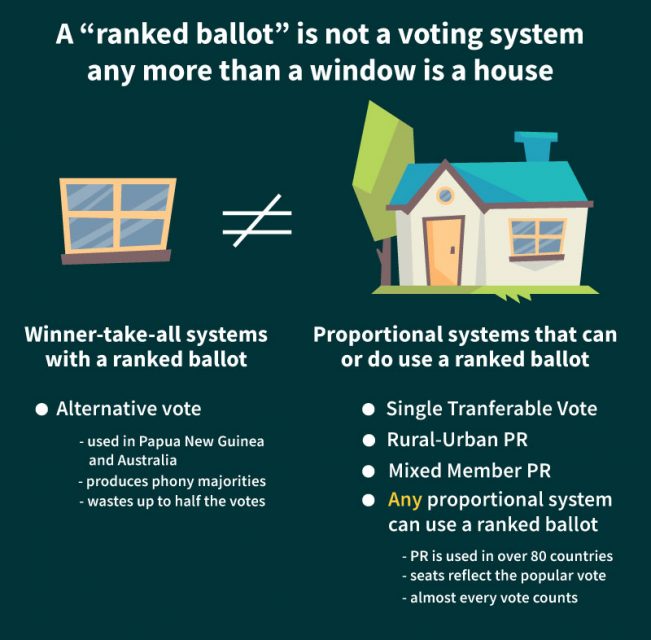 When discussing electoral reform options for Canada, there is a lot of confusion about “ranked ballots”.

Controversy makes a more appealing story, and the most common way the electoral reform options are presented is “ranked ballots versus proportional representation.”

Let’s start with the basics. 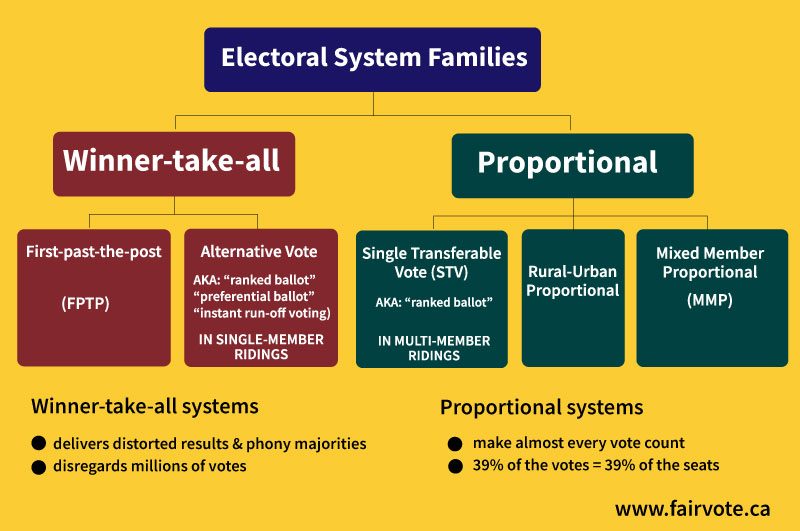 Proportional representation isn’t a voting system. It’s a principle that says 30% of the vote should earn a party about 30% of the seats.

The other way to look at proportional representation is as a family of systems where the point is to produce a legislature which reflects how people voted.

On the opposite end, you have the majoritarian/plurality family of systems. What we also call “winner-take-all.” The goal of systems in this family is to create a manufactured, single party majority government.

The problem with winner-take-all systems is they are designed to keep most voters out. It’s not uncommon for over 50% of voters to cast ballots which elect no-one, and majority governments to be elected with 39% of the popular vote.

How “Ranked Ballots” Fit In

a
Ranked ballots aren’t a voting system. They are a mechanism within a system that determines how votes are counted.

Ranked ballots can be used in winner-take-all systems and proportional systems.

When the mainstream media – or Justin Trudeau – uses the term “ranked ballot” they almost always use it to refer to the particular winner-take-all voting system used in Australia’s lower house which is properly called Alternative Vote (AV). All winner-take-all voting systems create false majorities, including the Alternative Vote. That’s the point of these systems – manufactured majorities.

But, ranked ballots can be used proportional system as well – STV, MMP or Rural-Urban Proportional. The key is: voters are electing more than one MP to a region or district.  Systems which ONLY include single members ridings (one winner) cannot be proportional.

What problems are we trying to fix?
a

The problems associated with all the systems in the winner-take-all family – phony majorities, ineffective votes, wild distortions between votes and seats – are what we are trying to fix.

Proportional systems – whether they use a ranked ballot or not – will fix the problems with first-past-the-post.

Winner-take-all systems – whether they use a ranked ballot or not – will not fix the problems we find with first-past-the-post.

A Word about Alternative Vote (AV)

Alternative Vote (AV) is the system used in Australia to elect its lower house. AV is used nationally in just two countries (Australia and Papua New Guinea). As noted above, AV is sometimes referred to as “preferential ballot.”

The results are: millions of wasted votes and overall results which are equally distorted to what we experience today. AV is not the least bit proportional.

In fact, expert testimony to the ERRE showed that it produces results more disproportional than first-past-the-post.

AV to elect our Parliament would mean replacing one winner-take-all system with another.

A run-off vote to elect a single position – like a party leader – makes sense. It makes no sense when the goal is to elect a representative body.

How can ranked ballots be used in proportional systems?

MMP is the proportional system used in Scotland, Germany and New Zealand. MMP was recommended in 2004 by the Law Commission of Canada.

With most MMP models, you have two votes – one for your local constituency representative, and one for a candidate from your preferred party’s regional list.

In countries around the world that currently use MMP, the constituency MP seats are elected with first-past-the-post.

However, these local members could also be elected using a winner-take-all ranked ballot in each constituency.

The regional seats could also be elected using a ranked ballot. Instead of just picking one candidate from you’ party’s regional list, voters could have the option of ranking them.

With MMP, the overall results in the region, and nationally, are proportional.

STV is the proportional system used in Ireland, Australian Capital Territory and Tasmania.

STV was recommended in 2004 by the BC Citizens’ Assembly.

Essentially, you take several ridings which now each elect a single member using first-past-the-post, and combine them to create a local district which elects a team of MPs using a ranked ballot. (The number of MPs per local district will vary by area).

Voters can rank as few or as many local candidates as they like.

With STV, the overall results in the district, and nationally, are proportional.

There is no voting system in the world called “ranked ballot.”

It can be used in a proportional system – such as STV or MMP – or in a winner-take-all system, such as Alternative Vote.

When the media refers to “ranked ballots” they almost always mean Alternative Vote, or describe Alternative Vote. This is the “ranked ballot” system Justin Trudeau is referring to. This unnecessarily confuses people and paints high quality, highly proportional systems with the same brush.

Only proportional systems come close to making every vote count.