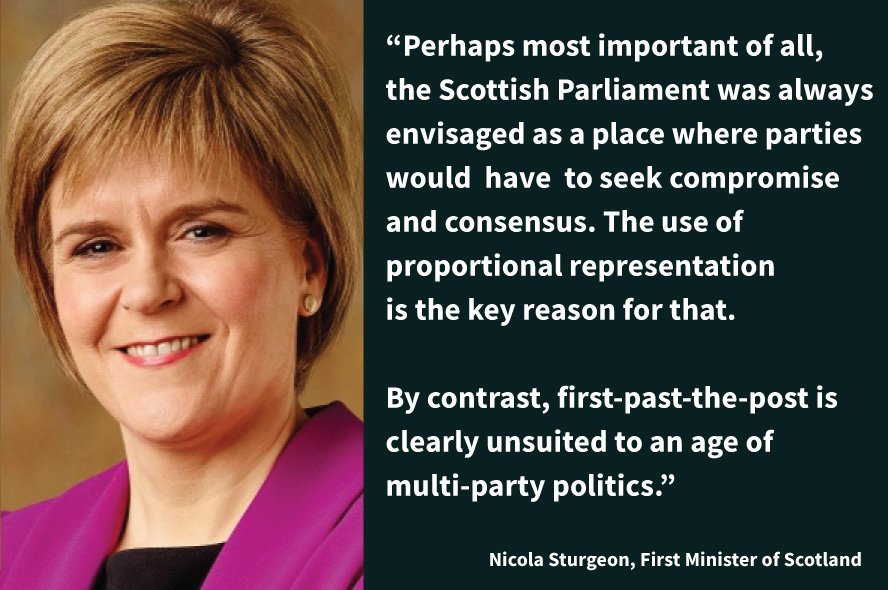 This is what it looks like when the government actually cares what you think.

Scotland is building a democracy fit for the 21st century. And a climate action plan to meet the emergency of our time.

It’s all thanks to the power of proportional representation and the leadership of the Scottish Citizens’ Assembly.

Scotland has had proportional representation (PR) since their Parliament was founded in 1999. As Scotland’s First Minister Nicola Sturgeon explained:

“The Scottish Parliament was always envisaged as a place where parties would have to seek compromise and consensus. The use of proportional representation in elections is of course the key reason for that. By contrast the first past the post system is clearly unsuited to an age of multi-party politics.
–

I don’t want to idealise the Scottish Parliament too much. Anybody who watches First Minister’s Questions will know that consensus has limits. Parties seek political advantage and argue strongly against each other – of course we do.
–

But we also get a lot done. And we consistently work together. All of the legislative successes I’ve mentioned had the support of more than one party. Several were passed unanimously.” 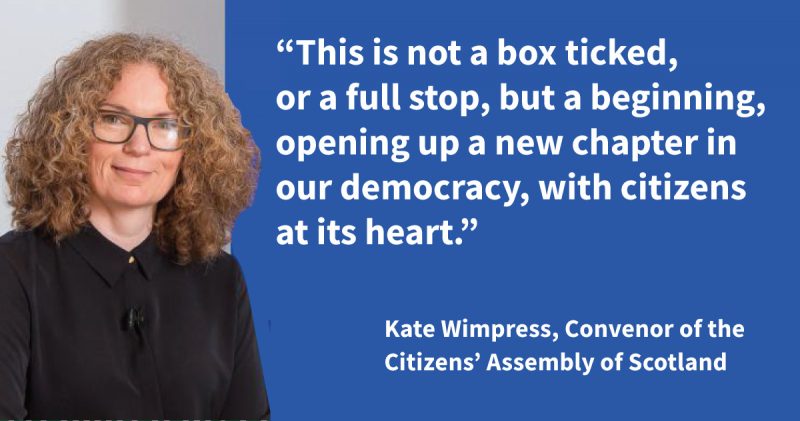 Having a solid foundation of proportional representation, Scotland is now taking people-powered democracy to the next level.

The Assembly brought together over 100 citizens from every walk of life. Assembly members were selected to truly represent Scotland’s population: age, gender, disability, household income, geography, ethnicity, rural and urban, and political opinions.

The Citizens’ Assembly came to describe themselves as “our mini-Scotland”.

The government refers to them as “representatives of our nation.”

So far, Scotland has convened Citizens’ Assemblies to tackle two huge challenges: a vision for Scotland’s future, and how Scotland should respond to climate change.

The Citizens’ Assembly on Climate also included a parallel Children’s Climate Assembly, whose recommendations were included in the final report.

Bold, ambitious and creative recommendations that were leaps and bounds ahead of what any government would propose on its own.

The recommendations of Scotland’s Citizens’ Assemblies were infused not only with a sense of urgency, but with the spirit of optimism and determination. 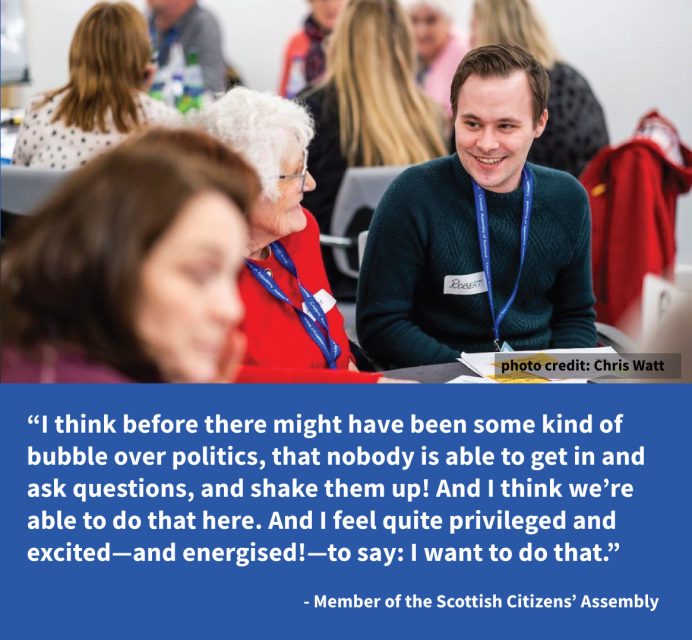 For the Assembly on Climate, that meant responding to 81 recommendations.

The government is also required to report back annually on its progress.

Scotland’s Citizens’ Assemblies have had a ripple effect, making an impact even before the government officially responded to their reports.

The Citizens’ Assemblies’ recommendations have influenced the platform pledges of the parties heading into the last election. They also influenced the commitments in the written power-sharing deal between the two parties in government.

Here are just a few recommendations pushed forward by the Citizens’ Assemblies that are now part of the government’s plan:

This challenge was embraced by the government, who are also planning a Citizens’ Assembly for youth under 16.

“One of our ambitions, echoing the Citizens’ Assembly, is for public participation processes to be a permanent addition to the democratic process here, making Scotland the first country in the UK to make such a commitment.”

Spurred on by success and a grassroots demand for more, citizens’ assemblies are spreading rapidly around the world.

Just days ago, two UK MPs from Scotland introduced an amendment to one of Boris Johnson’s bills, calling for a Citizens’ Assembly on Electoral Systems for the United Kingdom!

This is exactly what happened in Ireland, where Senator Lynn Ruane recently commented:

The creation of Scotland’s first Citizens’ Assembly was backed by three of five parties.

The creation of the second Citizens’ Assembly received unanimous support from every party in the legislature, including the Conservatives.

The Citizens’ Assembly report raises a number of important points about how politics is done in Scotland, how we can do things differently and how we can build up more trust and accountability.

I emphasize that those are not party-political points. They are fundamental to achieving a better democracy in Scotland.

As the assembly’s convener, Kate Wimpress, has said,

“This is not a box ticked, or a full stop, but a beginning, opening up a new chapter in our democracy, with citizens at its heart.”

This is what it feels like when your voice matters.

EXTRA: A long-time politician’s thoughts on the evolution of democracy in Scotland

From Proportional Representation (1999) to the first Scottish Citizens’ Assembly (2020)

Scotland’s Parliament was established in 1999, with elections to be held using Mixed Member Proportional Representation. The United Kingdom uses first-past-the-post for it’s national elections, so there was a learning curve and an ongoing struggle to move past a “winner-take-all” way of doing politics. Below, long-serving Member of Scottish Parliament and former Cabinet Minister Michael Russell reflects on the evolution of democracy in Scotland, from proportional representation to the Scottish Citizens’ Assembly.

“Change in democracy should challenge us as politicians. We discovered in 1999 how difficult it was to do politics differently. We discovered that it was really hard to work against the grain of politics as it was done elsewhere and as we had been doing it. Politics is often—then and now—confrontational, point scoring and a case of the winner takes all. The winner expects to take all.

If we could go back to 1999 in some form of time machine, we would see a very different form of politics and a different type of democracy. I think that we would say to ourselves, “Thank goodness for the Scottish Parliament. It has changed things and moved things on”.

One of the reasons why it has moved things on is because we have regularly recognized the legitimacy of different views.

However, it is hard to establish, and the longer that one has been in politics and the more one knows about it—and perhaps the higher one has risen up the greasy pole—the harder it is to recognize that culture of confrontation and work against it.

That brings a challenge to each one of us in politics. It is not even a question of sharing and still less one of holding feet to the fire; it is about a new order replacing what we have, and that will happen in time…

We are moving towards that type of democracy in the citizens assembly.

It will be difficult and it will not be an even process but, in 20 or 25 years, democracy will be different just as, in Scotland at least, it is different now from what it was in 1999. 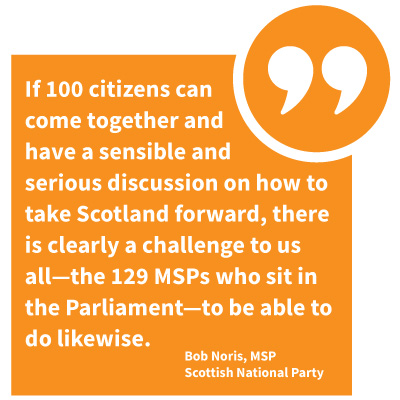 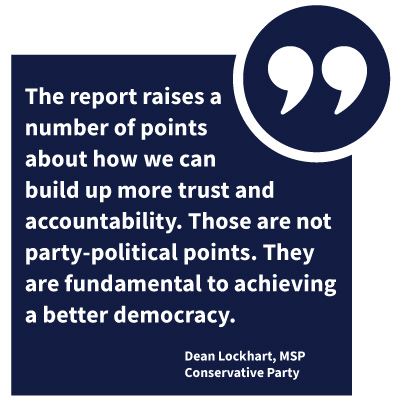 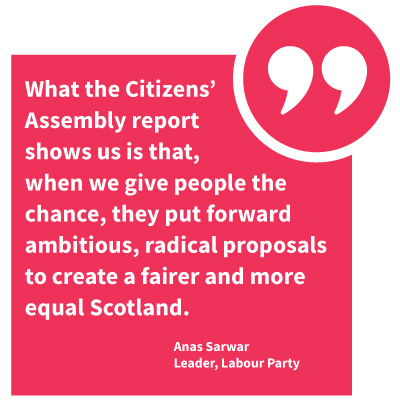