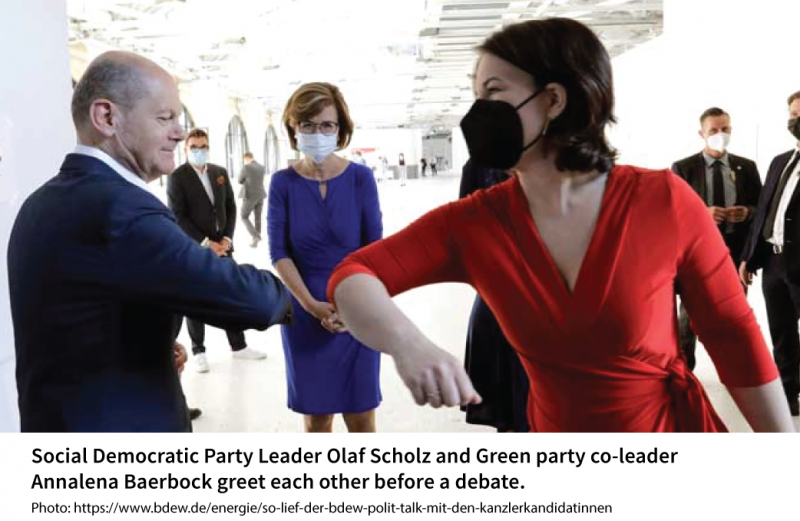 Canada just had a snap election.

With support of about 32.6% of Canadian voters, Trudeau’s Liberals secured 160 seats – just 10 short of a “majority”.

We have another Liberal minority government.

Lately, some people are asking what difference proportional representation would make in Canada today. After all, we have another minority government.

Across the ocean, Germany also just had an election.

The contrast to Canada’s election couldn’t be more stark. It wasn’t just in the numbers―it was in the politics.
a

When to call an election

Germany has elections every four years. With proportional representation, they always result in a coalition government. Parties always govern together.

An early election is possible in Germany, but it has only happened once since 1990.

When parties know none of them can grab all the power, the incentive to call an early election evaporates.

In Canada, with first-past-the-post, those incentives are turned on their head.

Our minority governments tend to last only about two years.

This is because our biggest parties look at minorities as an inconvenient (and unpleasant) accident. A detour on the road to having complete control of Parliament.

They don’t know how to work together in a serious way with other parties―nor do they want to try.

As soon as one party is up a few points in the polls―anything over 35%–someone will trigger an early election (and all parties will blame each other for it).

It’s the system.
a

In Canada, this election was characterized by the usual divisive fearmongering.

An exit poll conducted immediately after the election showed a whopping 49% of voters were voting to stop a party they dislike, rather than to elect a party they support.

In Germany, voters could vote for the parties and candidates they believed in―knowing their voices really mattered.

In Canada, only 48% of voters made any difference. Most voters elected no-one.

In Germany, the opinions of the vast majority of voters really mattered. 91.4% of votes went towards electing an MP― and helped determine the makeup of Parliament.

In Germany’s election, the values and hopes of voters expressed at the ballot box were directly reflected in their new Parliament.

Voters got what they voted for.

In Canada, our results were the usual funhouse mirror: 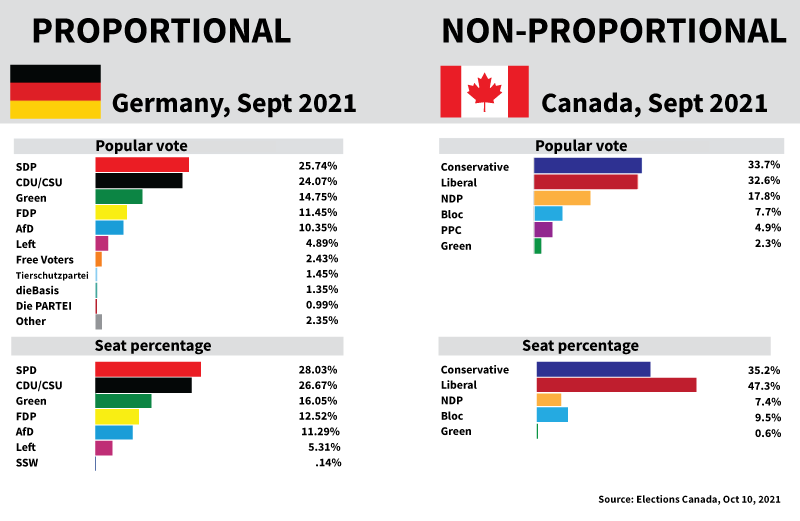 But all this isn’t even where the biggest contrast lies

By far the biggest contrast is in what happened AFTER the election.

The differences between first-past-the-post and proportional representation were laid bare in the responses of the leaders and their teams.

In Canada, Gerald Butts (former Principal Secretary to Justin Trudeau) took to Twitter, bragging about how the “geniuses” at the data company hired by the Liberals had excelled at micro-targeting a handful of voters in swing ridings.

Their measure of success? Delivering the Liberal Party the most seats with the fewest votes.

The masters of micro-targeting delivered the Liberals a 50-seat bonus over their popular vote.

How did Justin Trudeau react to the results on election night? 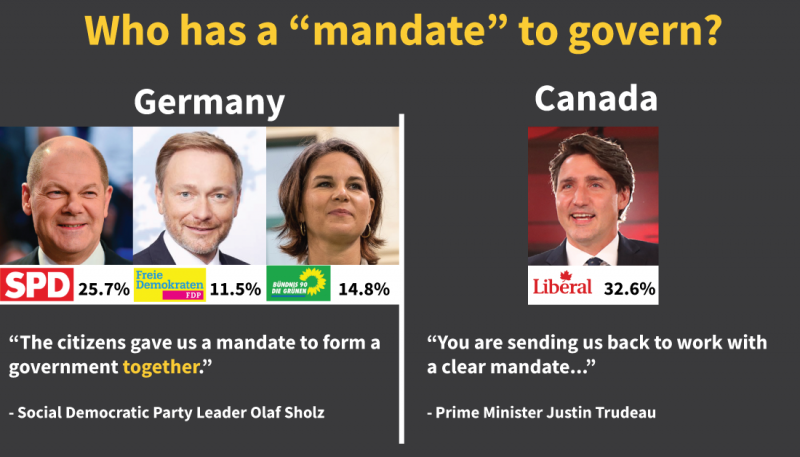 Trudeau told Canadians that they had (again) given his team a “clear mandate”.

In Germany, the contrast in the message from the party leader most likely to be the next Chancellor couldn’t be more stark.

Social Democratic Party (SPD) leader Olaf Scholz described the meaning of the election results like this:

“With their votes, they have made three parties stronger: the Social Democratic Party, the Greens and the Free Democratic Party. This is a message to these three to get the job done and move to form a government together.”

Reflecting on his former coalition partner (the party he just defeated):

“Ms. Merkel has a successful government record, and even as a Social Democrat, it is not difficult for me to acknowledge that. We were, after all, part of the coalition in three of the four Merkel governments and pushed through many things that were important to us”.

Reflecting on his future hopes for the “big tent” parties, he goes go on to say:

“Of course I would also like to see a conservative big tent party that has its own answers to the questions of the 21st century. That would be worth every effort.”

Try to imagine Justin Trudeau saying any of these things right after the election. Just try.

It took them less time to negotiate a post-Merkel coalition than it took for our Canadian Parliament to resume.

How did it happen?

Immediately after the election, the parties jumped into negotiations with respect and optimism.

“In the search for a new government, we are seeking out common ground and bridges over our divisions. And we are even finding some of those things. Exciting times.”

Then the three parties began negotiating together.

“If you want to form a government together, you have to have trust, because later we will have to solve many tasks that were not foreseeable at the time of the coalition negotiations.”

“You have to run a coalition with the ambition of getting re-elected at the next election. This will only work if all the coalition partners in the government come together with their ideas.”

“One lesson from real life is that genuine affection is the result of serious engagement.”

How are the negotiations going?

According to Svenja Schulze, member of the Social Democratic Party leadership committee and current Environment Minister:

“It’s a very trusting, very serious atmosphere, and we are talking very intensively about policies… You can sense this unity.”

Try to imagine this in Canada:

Three parties, immediately after an election, sitting face to face in earnest, talking “intensively about policy”.

Seeking to find common ground. To build “trust” and “unity”.

If it’s hard to imagine, it’s because first-past-the-post makes it all but impossible.

Even with a minority government.

Conservative leader Erin O’Toole publicly assured voters that his party was ready for another election in 18 months.

Yes, Canada, we have a minority government.

No, we do not have proportional representation.

Not by a long shot. 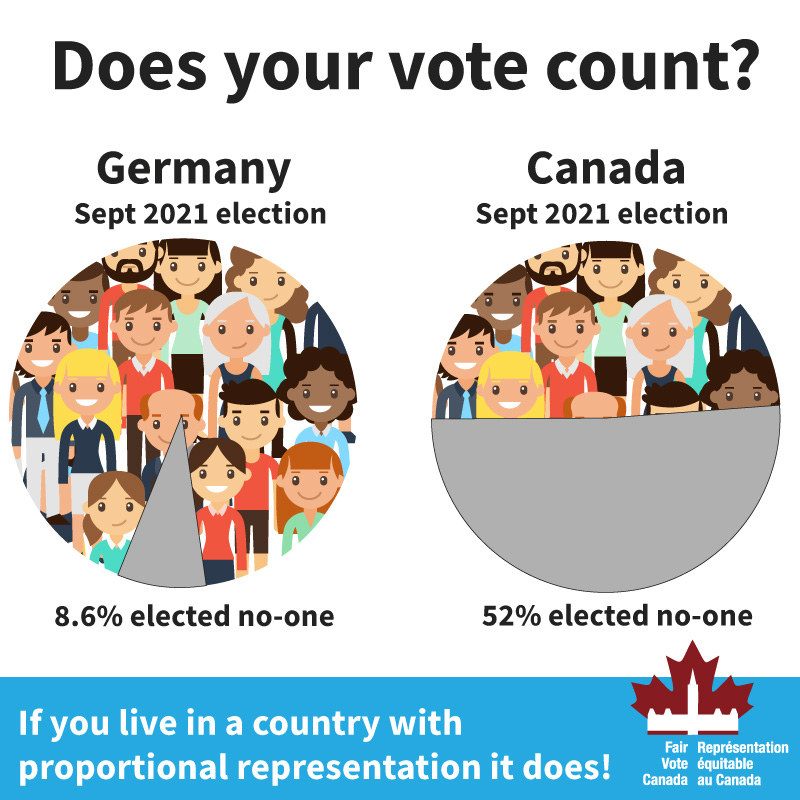 The Gallagher Index is a simple formula that determines how closely popular support for parties in the election matches seat results. A Gallagher Index of zero would be perfectly proportional (impossible to achieve and not desirable). The higher the score, the more disproportional and unrepresentative the results are. References for pictures below: Canada and Germany. 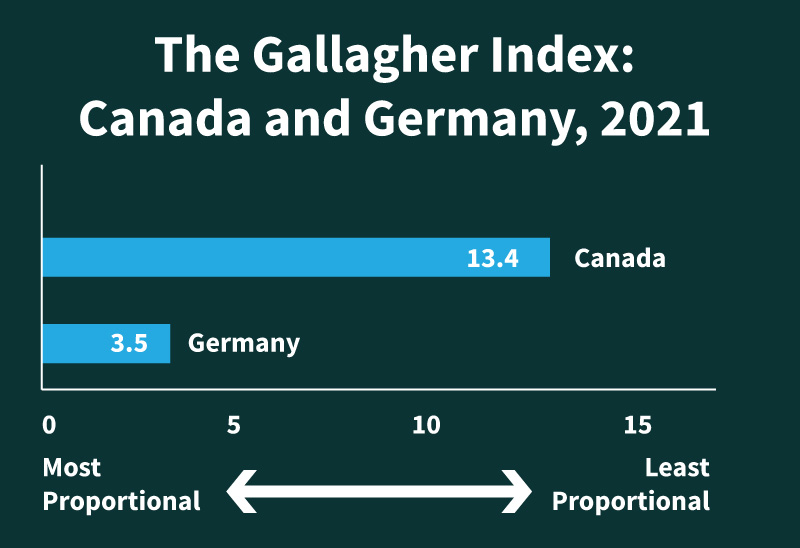 In 2020, Fair Vote Canada commissioned Leger, Canada’s largest polling company, to do a poll asking Canadians what they thought about electoral reform. Read the results here. 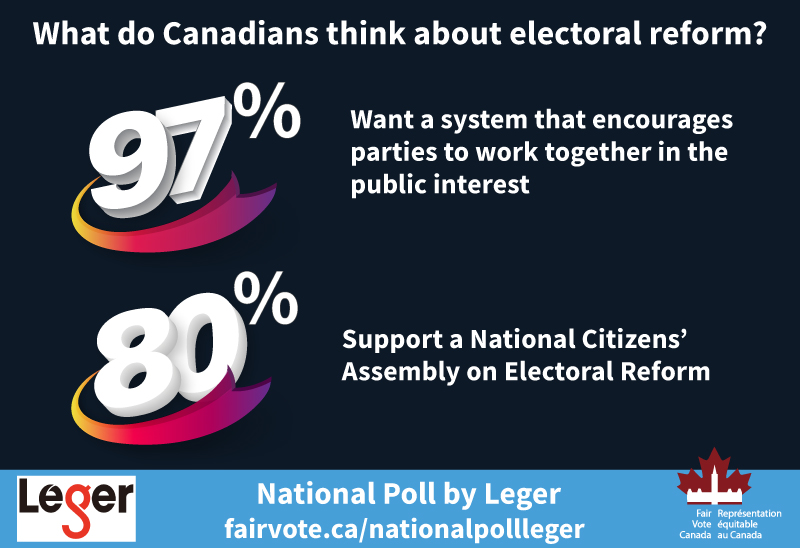 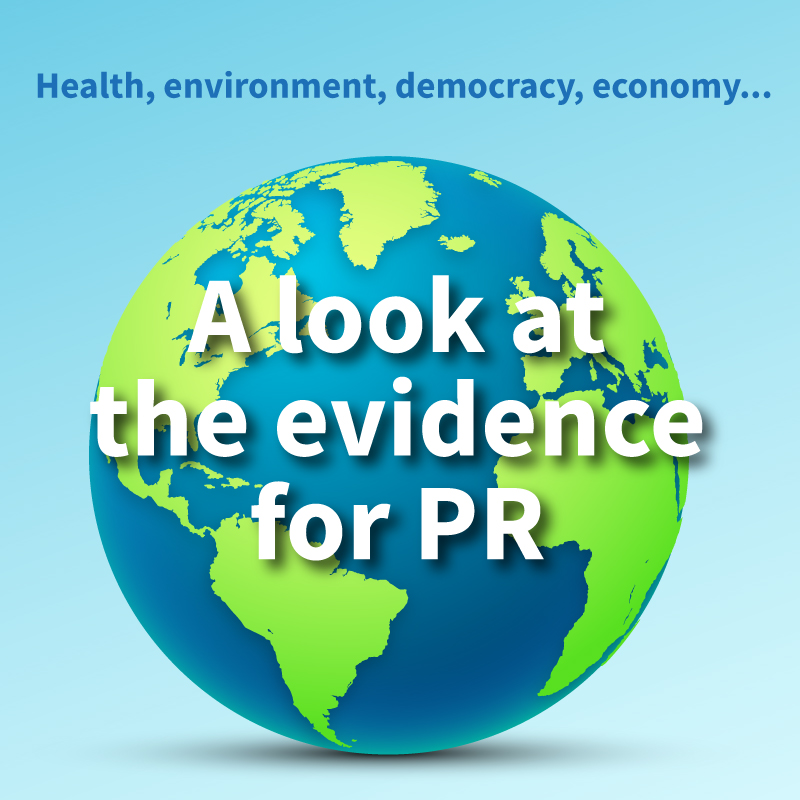