With the massive failure of Rogers―an internet outage that affected millions of individuals, businesses and government services―there’s been a lot of talk among Canadians about the pitfalls of monopolies.

There is nobody who seriously suggests that the current situation benefits consumers. It’s widely accepted that less choice leads to higher prices and worse service for everyone.

Monopolies look after their own interests, at the expense of everyone else.

This concentration of power with a few big companies ensures that consumers have almost no way to hold them accountable for their failures, either. Moments of failure may feed the news cycle, but when there is nowhere else to go, consumer anger morphs into resignation.

The players complicit in keeping others out have successfully managed to lower consumer expectations. As long as the service seems to work okay most of the time, consumers get used to settling for less.

Our experience with the telecommunications duopoly feels much like our experience as voters with Canada’s first-past-the-post voting system.

In both cases, all the power seems to rest with a couple of big players.

Does anyone truly believe that Canadians keep choosing to give the Liberal and Conservative parties unilateral control because we are inspired and impressed by their performance? Of course not.

Canadians don’t actually vote for majority governments: it’s our voting system that keeps artificially creating them for the Liberals and Conservatives.

It’s no surprise that the vote shares for the big two parties have been trending downwards for years. In the last federal election, the Liberals hit an all-time low for a governing party in Canada, capturing a mere 32.6% of the popular vote.

For many voters, elections become a “strategic” choice between bad and worse, like Rogers and Bell. For most of those who vote sincerely for their preferred candidate, casting a ballot is like requesting a service that will never be connected.

It’s not even accurate to call our electoral system a duopoly. While there are choices on the ballot, the typical result is a series of monopolies. The two biggest parties take turns calling the shots.

Each election is a battle for which single party will win all the power (a monopoly) for the next four years.

To win total control of Parliament, a party needs to earn the support of little more than one third of voters. Inspiring more voters across the country to choose them isn’t even on their radar. Their strategy boils down to microtargeting voters in swing ridings to get the most seats with the least votes. Party strategists call this path to a monopoly “vote efficiency.”

Voters do not really want to put all their eggs in one basket. The first-past-the-post voting system does it for them.

Is it any wonder the parties that benefit from winner-take-all voting fight so hard to keep it?

The single party monopoly has far-reaching consequences for everyone

When a big player controls everything we rely on, we’re all at risk when they fail.

When Rogers failed, the effect was drastic and immediate.

Instantly, paying for groceries, checking on our children or elderly parents, being able to attend school online, do our jobs, or even call 911 were things we could no longer take for granted.

The impact of the monopoly produced by our winner-take-all voting system is longer term, more insidious and much more profound.

When a single party holds all the power in government, and their policies on health care are costing people their lives, where do voters turn?

When a governing party’s policies on the environment are contributing to irreversible climate change, what recourse do voters have?

Who can the voters who aren’t part of the governing party’s small voting base pressure for change?

Proportional representation means voters have more power. Not just on election day, but every day. Politicians and parties have competition. And that makes them more responsive.

With PR, voters have more choice at the ballot box―and their choices directly translate into seats in Parliament.

Proportional representation (PR) means the end of unearned, single-party monopolies. PR makes it impossible for a single party with only minority voter support to control all the levers of power.

Most often with PR, parties govern together. Voters aren’t relying on the judgment and skill of one party alone, on every issue.

At election time, every voter has an MP they helped elect to hold accountable. And if they don’t like the performance of their MP, voters have a realistic chance of electing a competitor.

The Rogers blackout has reminded us that monopolies are dangerous. Ordinary people need the ability to bench underperforming players. And the best way to do that in the political arena is by increasing competition. Let’s make politicians earn their jobs―and their majority governments―by making every vote count. 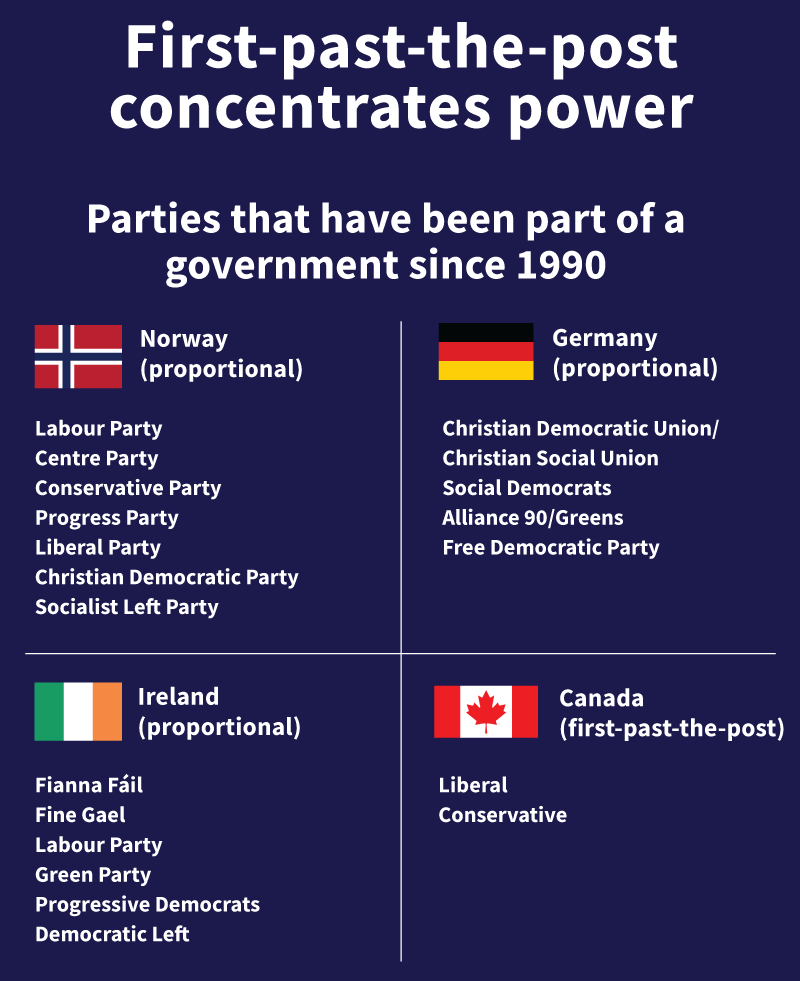