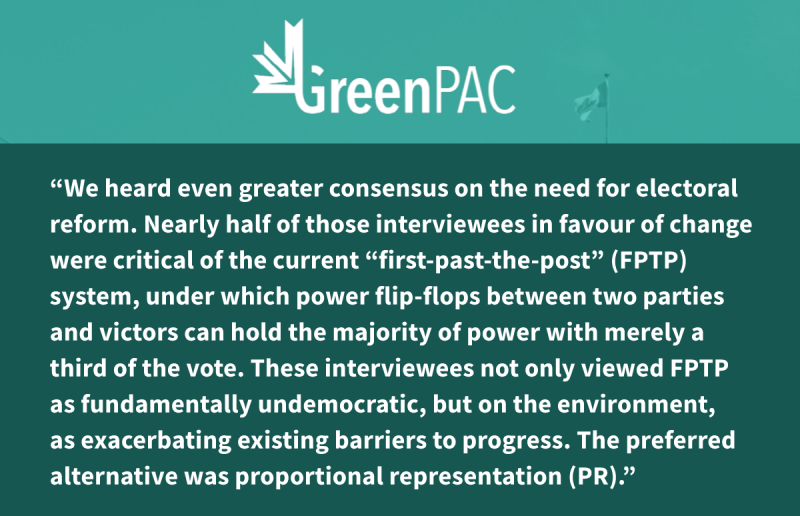 Two thirds of the MPs interviewed believe that problems in Canada’s democratic system are holding back climate progress.

The report, released March 9, was based on interviews with 18 current and former MPs who had been endorsed by GreenPAC in the 2015 and 2019 federal elections. Interviewees came from across Canada and from all parties. According to climate champions in the House, the voting system needs to change:

GreenPAC’s “We heard even greater consensus on the need for electoral reform. Nearly half of those interviewees in favour of change were critical of the current “first-past-the-post” (FPTP) system, under which power flip-flops between two parties and victors can hold the majority of power with merely a third of the vote. These interviewees not only viewed FPTP as fundamentally undemocratic, but on the environment, as exacerbating existing barriers to progress. The preferred alternative was proportional representation (PR)”.

According to GreenPAC, one-third of interviewees across party lines cited partisanship as one of biggest barriers to environmental leadership in the House of Commons, and more than two-thirds called it problematic. 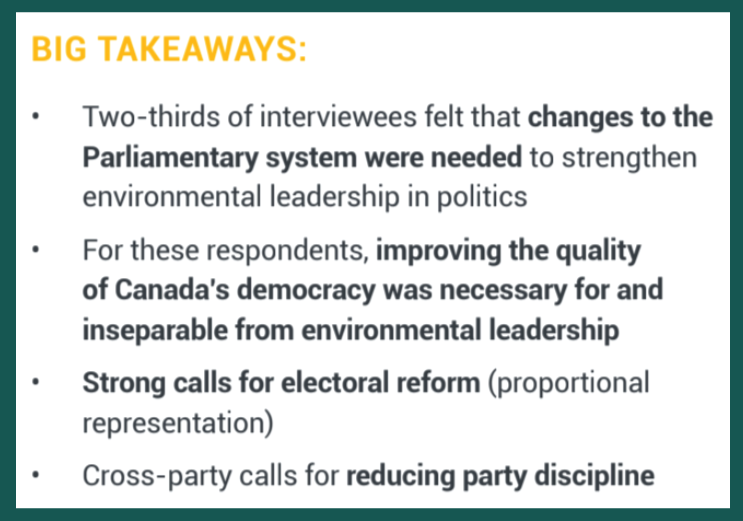 MPs minced no words about the state of Parliament: In the current system, it’s party first. The power to control MPs is at the top. Even on urgent and existential issues like climate action, parties simply are not working together. Far too often, environmental progress is a victim of toxic politics.

As Catherine McKenna, former Minister of the Environment, told the National Observer: “We just don’t have time for this.” 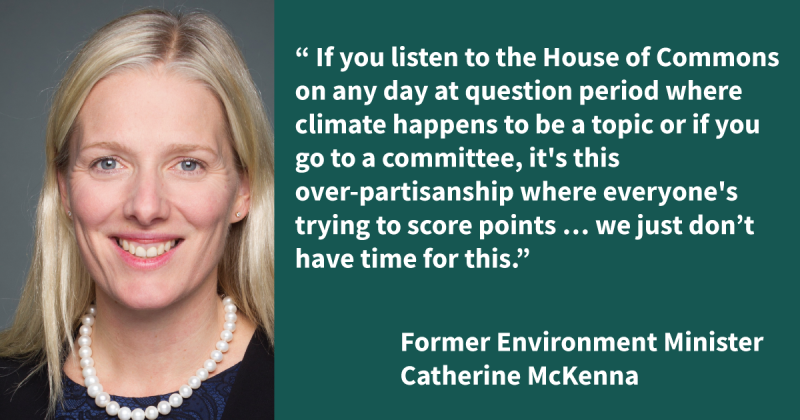 The politics of countries like Canada and the U.S. (with first-past-the-post) and Australia (with winner-take-all ranked ballots) means they continue to languish at the bottom of the Climate Change Performance Index.

Stuck with unrepresentative, adversarial electoral systems, climate policy becomes a partisan wedge issue. Gains made by one false majority government are quickly undone by the next.

This kind of extreme policy lurch with winner-take-all voting has cost Ontario a bundle and is the major reason why serious climate action has been stalled for a decade in Australia.

Around the world, countries with proportional representation show how fair results and cooperative politics make the difference for climate policy.

In New Zealand, Jacinda Ardern’s Labour Party won an outright majority with proportional representation in 2020, but reached across the aisle to give the Green Party the portfolio of the Minister of the Environment. The goal: to build “as wide a consensus as possible” because policy with broad support is policy built to last.

In Denmark, which uses proportional representation, nine parties signed onto a jointly developed climate law – the most ambitious in the world.

In Scotland, which uses proportional representation, every party in the legislature backed the creation of a Citizens’ Assembly on Climate. The government has now responded to each of the 81 recommendations.

It’s not just stories: Research backs it up. Over decades, countries with proportional representation have:

Whether Canada fixes its broken electoral system could have profound consequences for our ability to meet the rapidly growing impacts of the climate crisis, and provide a predictable policy regime for business while doing so.

Fortunately, there is real hope for action on electoral reform in this Parliament.

In June, 2021, three parties (Liberals, NDP and Bloc) voted for NDP Democratic Reform Critic Daniel Blaikie’s motion at the Procedures and House Affairs (PROC) committee to study a National Citizens’ Assembly on Electoral Reform. The Green Party also strongly supports this, but did not have a seat on this committee. The vote passed 7- 4, with only the Conservatives voting against it. However, if Michelle Rempel Garner’s piece in the Western Standard is a sign, the Conservatives may be ready for a new conversation on electoral reform.

For Canadians concerned about our ability to meet the growing climate crisis, real reform can’t come a moment too soon. As one MP told GreenPAC:

“[What does it take for an MP to be an effective environmental leader in office?] It takes a big brain, it takes backbone, but more importantly, it takes electoral reform.” 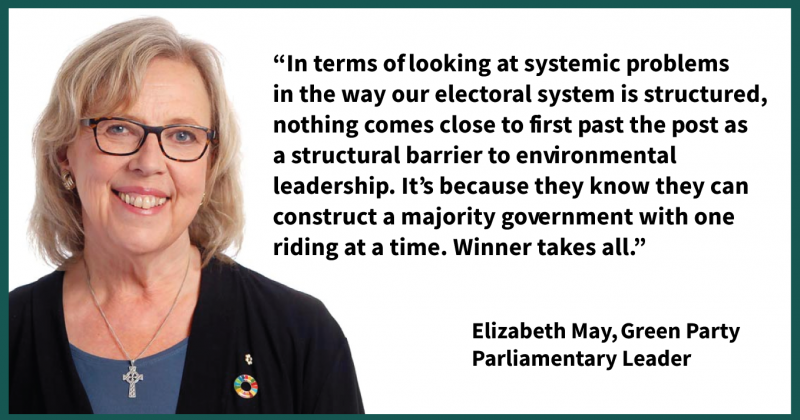