Kelly McParland gets it wrong on electoral reform 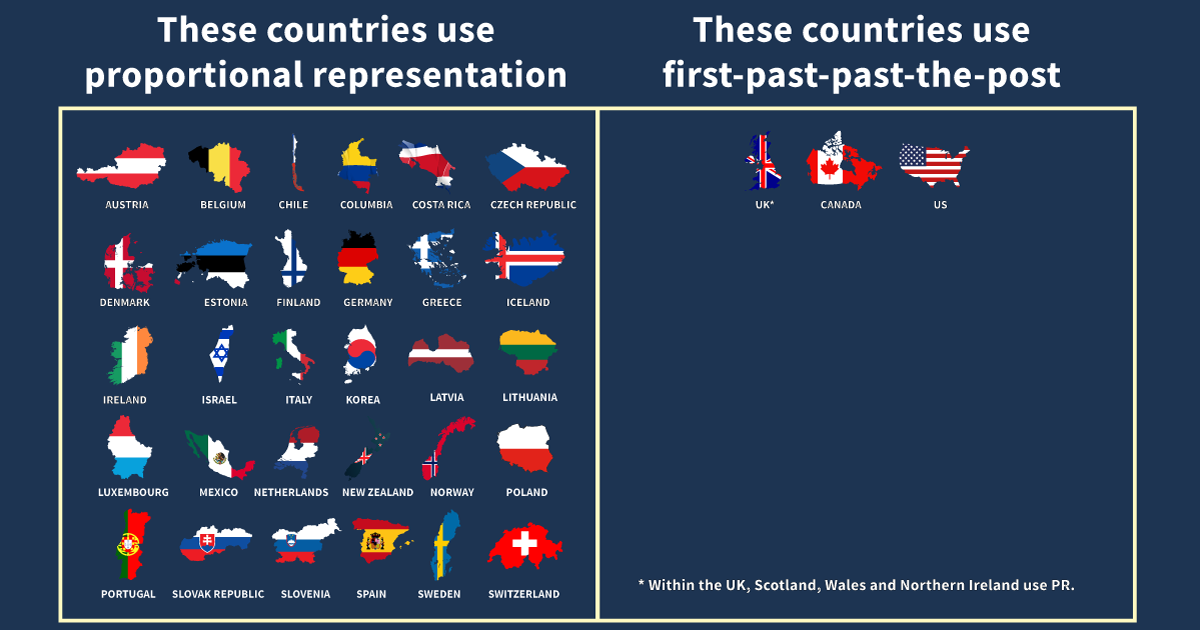 Kelly McParland’s recent column on electoral reform is nothing if not predictable.

Each time proportional representation (PR) has started to gain momentum in Canada over the past twenty years, opponents have reliably trotted out Israel with the goal of  derailing progress.

True to form, McParland spends half his column dissecting an exceptional set of political circumstances in Israel―while completely ignoring the 80% of OECD countries that use proportional systems with resounding success.

The countries with the most successful economies in the OECD―those with the top GDP per capita―almost all use proportional representation.

In places with PR that have much more in common politically and culturally with Canada, such as Scotland, Ireland, and Norway, none of the nightmare scenarios McParland rails about have come to pass.

Instead, evidence shows that voters empowered by PR are getting more from their governments on almost every measure that Canadians care about, from health outcomes to economy to environment.

Let’s dig into McParland’s claims one by one:

McParland: “Israel has a proportional representation system of the type reform enthusiasts like to advocate.”

Actually, no. It is surprising that a columnist would have such little knowledge of a subject and write about it anyway―and that it was published.

Any journalist who has paid even scant attention to what’s been recommended for Canada would know that no credible expert, advocacy group, commission, committee or assembly in Canada has EVER recommended the kind of proportional system used in Israel.

Not only is Israel’s nation-wide party list system unconstitutional in Canada, it’s completely unappealing to Canadians and frankly, irrelevant to the discussion.

The main place we see Israel mentioned is in opponent columns in newspapers like the National Post.

Since 1921, every expert or citizen body which has recommended a new electoral system in Canada has proposed a proportional system similar to those used in New Zealand or Ireland.

Those systems respect―and even strengthen―local representation while ensuring that the Parliament overall reflects how people voted.

McParland (referring to Israel): “Its voting system isn’t solely to blame for its struggle to find a stable governing regime, but it certainly hasn’t helped.”

Not only is proportional representation not the cause of the unique cultural and religious groupings in Israeli society that we see reflected in their Parliament, it tends to reduce tension by ensuring that diverse groups can have their say.

Using winner-take-all voting to deny representation in Parliament to groups with unique identities and interests―so one faction can take total control―is no recipe for stability.

Regarding stability, McParland overlooks the irrefutable evidence that in OECD countries who use proportional representation, elections are no more frequent than in countries with first-past-the-post. (See image below).

For fifty years, from 1949-2020, voters in Israel didn’t go to the polls any more often than voters in Canada. The past two years in Israel have been an exception to the political pattern of the last half century.

Countries with PR have a better track record of stability in ways that matter. They avoid the wasteful cycle of policy lurch that is endemic to winner-take-all systems, where each new false majority government spends its first hundred days undoing the policies of its predecessor. Instead, parties work together to build policy that lasts.

When it comes to issues that require long-term vision and follow-through from our governments, stability that transcends political terms is crucial.

McParland: “Bring in some rep by pop, the thinking goes, and you’d probably get a regular series of Liberal-NDP coalitions with a bunch of grumpy, outnumbered conservatives on the other side, which is why the Liberals and NDP tend to love the idea of a switch and the Tories don’t.”

First, “rep by pop” is an entirely different topic from proportional representation. Rep by pop refers to how many electors are in each electoral district.

McParland goes on to repeat a myth about proportional representation that conservatives will be perpetually “outnumbered”. It’s the usual fearmongering about an endless “Liberal-NDP coalition”.

In fact, this isn’t what happens in countries with proportional representation at all.

In countries with PR, left-leaning and right-leaning governments alternate in power, depending on the wishes of an actual majority of voters.

Parties with different views also work together across party lines much more frequently, drawing the best ideas from each party.

In 2021, they were replaced by a government consisting of a centre-left party, the Green party and a business-friendly party on the right.

There’s simply no country in the OECD where voters on the right have been perpetually shut out of government or influence.

McParland: “If proportional representation does anything, it’s to encourage proliferation” (of political parties with seats).

It’s certainly true that there are more parties in some countries that use national party list systems, like Israel. Again, these systems are irrelevant for Canada.

What’s important to note is that countries that use the proportional systems recommended for Canada have no more parties with seats than we have. (See image below).

It’s not only a matter of requiring a high threshold to gain representation under the PR systems recommended for Canada.

As has been observed in New Zealand after it switched to PR in 1996, adopting PR simply doesn’t cause voters to flock to small parties that have little influence. Small parties start, but they often don’t last.

Instead, voters by and large continue to choose the mainstream parties, and see themselves more fairly represented in Parliament with PR.

PR provides voters of smaller parties with a guarantee of representation, but no guarantee of influence. When small parties are too “extreme” they are almost always excluded from policy-making.

McParland: “Would anyone bet against the founding of a trucker party?”

A more relevant question is: Would anybody bet against Pierre Poilievre winning the Conservative Party leadership?

Only a winner-take-all system allows those with a minority viewpoint to co-opt or rise to the top of a large, mainstream party―a party which may end up governing with unilateral control of the country, despite earning only 35-39% of the popular vote.

McParland suggests “we might all learn to rally round the flag and seize on a shared vision of Canada without the regional, social, cultural, economic and geographic divisions that are eating at the seems.” (Yes, he meant “seams”).

The kinds of “divisions” McParland speaks of are also a source of Canada’s strength.

Canadians value a vision of the country where people from different regions, cultures and political views can live and work together, united in a shared goal of making Canada the best it can be.

Recent research shows that proportional representation reduces partisan hostility and polarization. Researchers found PR fosters warmer feelings towards those with different political views, because their parties have a history of working together.

Evidence from around the world shows that making our democratic system more inclusive is something to be embraced, not feared.

We can tackle the challenges ahead and realize our shared dreams for Canada better by working together. 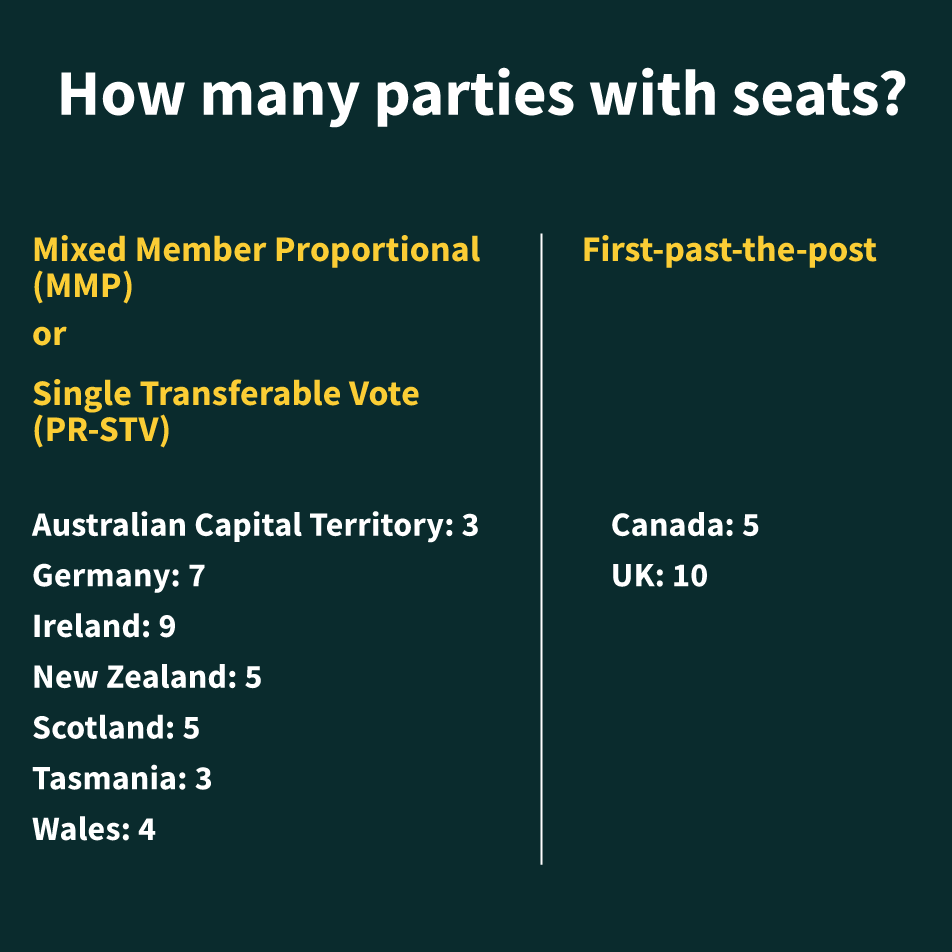 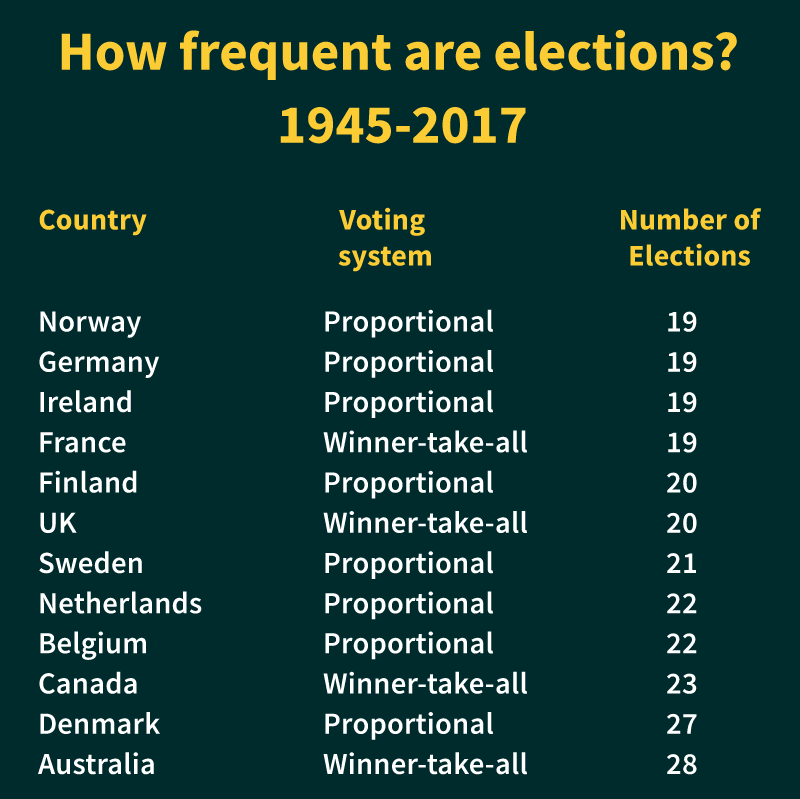