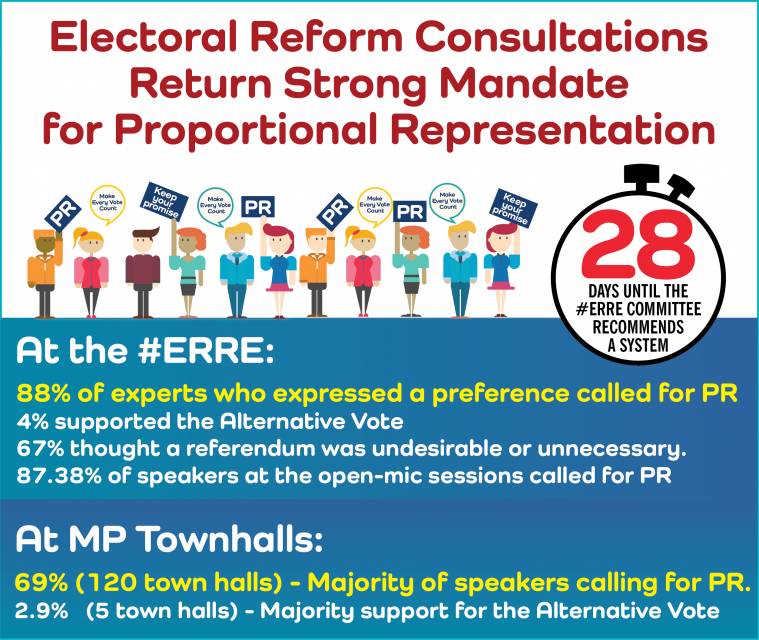 The all-party committee on electoral reform (ERRE) has just finished four months of expert and public consultations. They will make their recommendation to Government by December 1st.

Of the ERRE witnesses with a position on voting systems, 88% recommended Proportional Representation. This reinforces the findings from decades of research from around the world and of 13 previous electoral reform processes in Canada, including two thorough and impartial citizens assemblies. 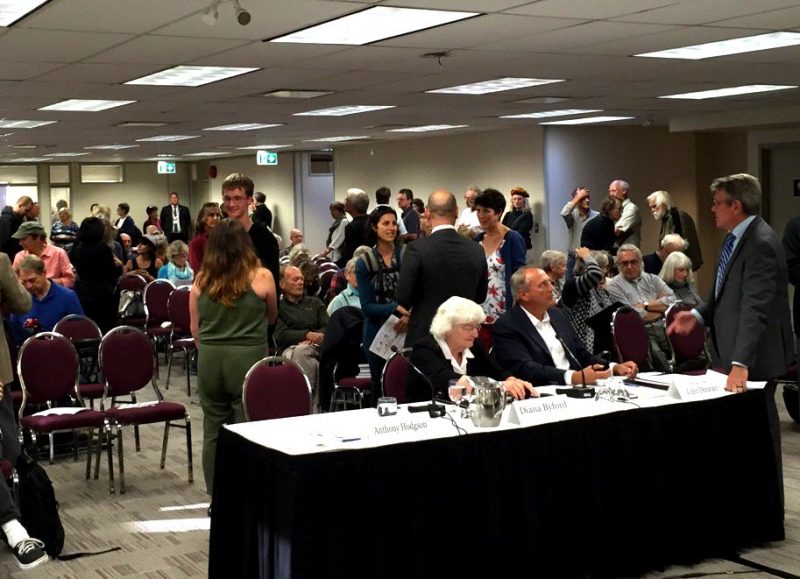 When the Government launched the process without a mechanism for collecting empirical data, Fair Vote Canada, a multi-partisan advocacy group, started tracking the process very closely. We are releasing the results of our work to the media because we believe the process needs to be transparent and accountable.

(You can find key results below with links to our spreadsheets.)

Despite a strong call for proportional representation across all of the consultative platforms, we believe reforming the electoral system could be in serious trouble based on recent comments from Prime Minister Trudeau and Minister Monsef.

President Réal Lavergne expressed Fair Vote Canada’s concerns “We are worried that the Minister and the Prime Minister are saying that we cannot count on the government keeping its promise to make every vote count. Yet experts and Canadians have clearly expressed themselves in favour of proportional representation, which is what it really means to “make every vote count.”.

David Merner, Vice-President of Fair Vote Canada and a Liberal candidate in last year’s federal election adds “This is not the time for back-tracking. The Prime Minister and the Minister of Democratic Institutions have personally created a sense of hope in Canadians, building on the 2015 Liberal campaign promise of Real Change. Millions of voters believed that the government intended to keep its promises. We believed the political cynicism of the Harper years was behind us, and thousands of us participated in the government’s consultations in good faith.”

Merner says “Now is the time for the government to deliver on its promises.”

Highly regarded Conservative strategist and spokesperson for the Every Voter Counts Alliance, Guy Giorno, adds that “committee members must endorse what’s right for Canadians, not what benefits any particular party. Given the weight of the evidence before the committee, the only legitimate option is a recommendation for proportional representation. Let’s also remember that electoral reform was a major issue at the last election, and voters overwhelmingly supported parties promising change.”

The weight of expert testimony in favour of PR was echoed across the country in hundreds of town halls and public dialogues.

Over the next few days the ERRE will negotiate a recommendation for a new electoral system for Canada. The final report is due on December 1.

Fair Vote Canada’s President Réal Lavergne explains that “Once that recommendation has been made, it will be incumbent on the minister to carry it forward and for the government to act on it. Leadership will be required to educate both the public and parliamentarians, and to champion the proposed reform.”

“Based on all the results of the expert and citizen consultations, the committee’s only legitimate option is to recommend in favour of proportional representation.”

4% supported the Alternative Vote (majoritarian ranked ballot systems tend to evolve towards a two-party system, often favour centrist parties and could further entrench the distortions brought about by our existing majoritarian system. )

67% thought a referendum was undesirable or unnecessary.

From coast to coast, Canadians lined up at the ERRE open-mic sessions asking that the committee keep the promise and deliver PR.

According to data released this week by the NDP, out of 428 participants who spoke up, 374 (87.4%) called for proportional representation.

The following indicates the level of support observed for proportional representation in MP town halls.

8.1% (14 town halls) – Report does not allow any majority view to be identified

Here are basic indicators from the 31 dialogues or town halls hosted by citizens and community groups posted on the ERRE site or for which we have directly obtained the information so far:

83.9% (22 events) – A majority of speakers calling for proportional representation

6.5% (3 events) – Report does not allow any majority view to be identified.

We are aware of at least 15-20 other community dialogues that are not yet posted on the ERRE site.

Detailed analysis can be found here.

Minister Monsef organized two types of town hall consultations: ones in her own riding, and others as part of a cross-country tour. Here is an extract from the report submitted to the ERRE on town halls held by Minister Monsef in her Riding of Peterborough–Kawartha:

“It is clear that there is an appetite for thoughtful change to the electoral system. While opinions on the various electoral systems did vary, most participants indicated their support for a more proportional electoral process that still respected the need for local representation and simplicity of the ballot.”

Although Minister Monsef routinely conducted straw polls on issues such as mandatory voting and online voting in town halls on the road, she did not do the same regarding support for proportional representation. FVC volunteers attended these events across the country and shared their opinions. Here are a few quotes from participants:

Toronto: “PR was clearly the main issue for most. With respect to PR, many attendees spoke passionately and eloquently in favour, and if anyone present opposed it, he or she was not bold enough to express that view.”

Vancouver: “It seemed that 90% of the audience… did want some form of PR.”

Edmonton: “ It seemed most people were in support of some sort of proportional representation.”

Yellowknife: “She asked whether the participants liked FPTP to remain, or Ranked system or STV or MMP or Proportional Representation implemented. One voted for FPTP. Many voted for MMP and a few voted for PR.”

Yukon: “Some Yukoners came in support of our current electoral system (First Past the Post); more were on the side of moving towards proportional representation.”

Halifax: “The feedback from the groups certainly favoured PR.”

Montreal: “There was an overwhelming support for PR in the room.”

Thunder Bay: “Of the dozens who rose to spoke, everyone spoke in favour of PR.”

Gatineau: “ Participants spoke to PR at every opportunity they had… However, the format made this difficult… Taking into consideration those interventions that spoke to the issue of PR vs FPTP or AV, the overwhelming majority of interventions – in the order of 70% or more – were in favour of PR.”

Waterloo: From the report of 4 MPs: “Every group discussed the need for our new electoral system to feature some degree of proportionality.”

Charlottetown: “ About 90% of the people there were pro-PR.”

Winnipeg: After noting that three people were for FPTP because they feared losing local representation. The rest of the comments I heard were mostly just preferences for the different PR systems.”

Happy Valley-Goose Bay: “What we said was that we wanted PR  BUT, it had to be a hybrid type that considered the lack of population and massive land mass of not only Labrador but 60 % of Canada, i.e. the North.”

Calgary: “There was overwhelming support for getting rid of the current system, with different groups mentioning STV or MMP as their top choice.”

And, to conclude, this eloquent quote from a Fair Vote Canada volunteer at the Victoria town hall where the Minister said she “can’t promise you that I’ll be advocating for PR because I haven’t heard that from an overwhelming majority across the country.“

Victoria: “The wheels were skidding out of control as we tried to combat the spin we received at last night’s town hall on Electoral Reform. Maryam Monsef, the Minister of Democratic Institutions hosted the gathering in Victoria billed as “the last chance” to give your input. But the tone of the meeting was quite acrimonious. They were clearly managing the message while backpedaling from an election commitment about changing the electoral system. Not only did she defend Trudeau’s recent comments about no longer needing this reform because we voted for HIM.”

“After months of hearing expert witness by the proportionally cross-partisan panel, and while MPs held public consultations with thousands of Canadians across the country, are we now to believe there is no appetite for Proportional Representation? Monsef said that she has not yet made up her mind but the implication of her words was troubling. Will the government diminish the committee’s well-researched, democratic report in December by championing their predetermined preference? For many of us who attended last night the so-called consultation felt like a sham.”